Most companies have a standard hiring process. After CVs are screened by recruiters and sent to the person in charge of the hiring at the organisation, interviews are conducted with the shortlisted candidates. Based on the outcome of the interview, those candidates who are rated at a satisfactory level proceed to the next step, which are psychometric assessments, to assess which of the applicants left are the best fit.  This is known as the Multiple Hurdle Method.

This is somewhat worrying, considering that interviews, on their own, have been shown to be a lot less effective in predicting job performance than psychometric assessment results. 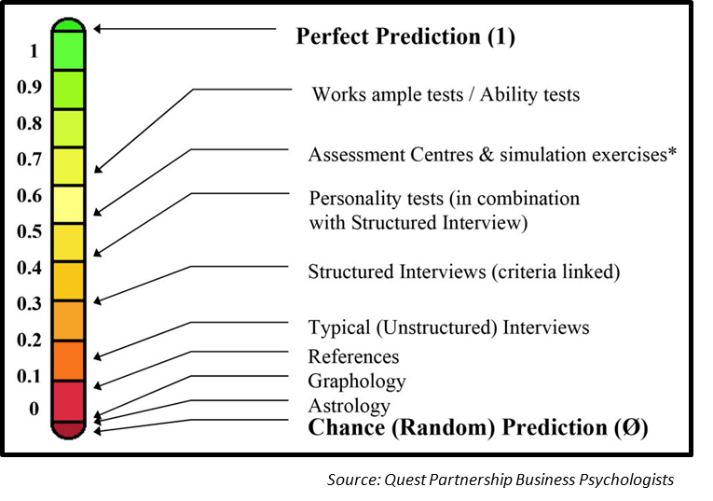 The diagram above, shows the relative validity of particular assessment methods, or in other words, how well they are likely to predict job success. The closer to 1.0 a method is, the better it predicts job success. 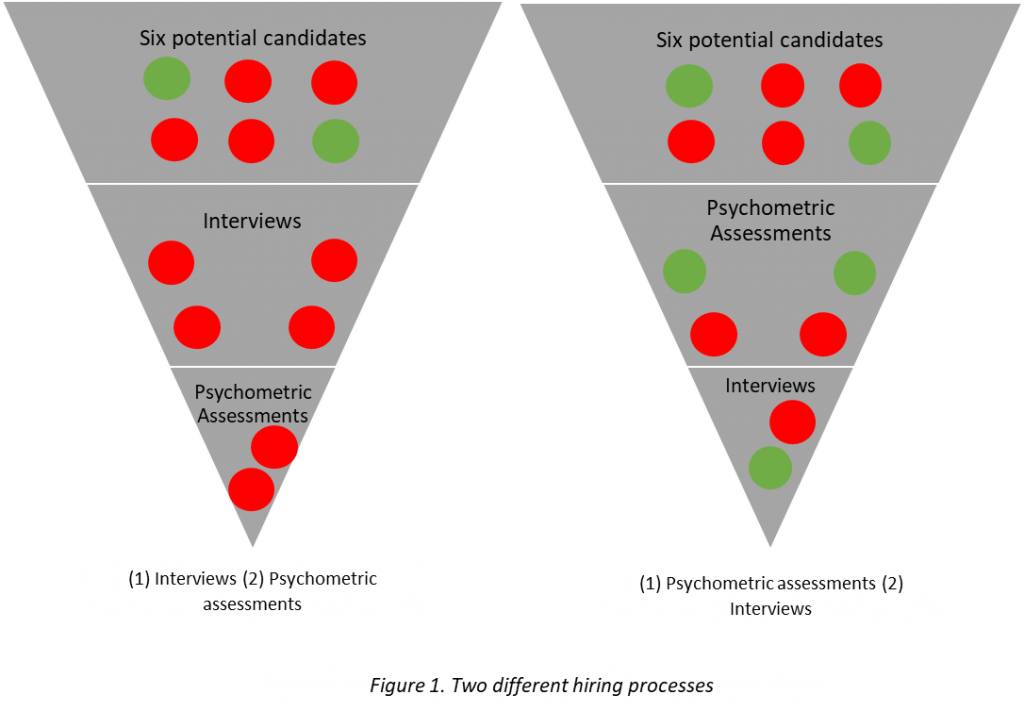 To illustrate two potential scenarios, refer to Figure 1 above. The inverted triangle on the left illustrates the most common standard hiring process where interviews are used first to eliminate candidates. The triangle on the right first uses psychometric assessments.

In the figure, all the green dots represent top talent, who are best qualified for the role. The red dots represent those individuals who are the least suitable applicants. In this scenario, the organisation receives a list of potential candidates, whereby there are two “top talent” individuals and four less suitable candidates.

It has been said that interviewers form an opinion of the candidate in the first five minutes and spend the rest of the interview experiencing a multitude of unintentional biases, such as Confirmation Bias, First Impression Bias or Stereotyping Bias, in order to confirm their initial perceptions. It has also been suggested that over 80% of people lie during interviews.

As a result of interviews, have basically little ability in predicting job performance – anybody who “interviews well” will make it to the next stage of the hiring process. As there is no scientific rigour behind the decisions, the likelihood of anyone, including the least suitable candidates will proceed, whereas top talent can be declined. Once these shortlisted candidates complete the psychometric assessments, as illustrated in Figure 1, the organisation is left to make a choice between who is the “best of the worst”. Thus, it has been argued that performing interviews before psychometric assessments, is hiring backwards.

Based on Figure 1, using this information as well as the information gathered in an interview, the end result is having one top candidate with one less suitable candidate to choose from. It is important to note that interview data can also be useful when used in conjunction with other data. There are ways to interview that are more effective than others.

Despite all the evidence pointing to using psychometric assessments first, it has been argued that this option is not viable, due to their high costs. However, it can easily be argued that interviews cost just as much, if not more, in management’s time. So too one needs to consider the cost of hiring the wrong person. According to an American study, the average cost of hiring the wrong employee was estimated at $20,000.00.

Smith, J. (2015). Interviews are a terrible way to hire. Retrieved from http://www.businessinsider.com/interviews-are-a-terrible-way-to-hire-2015-4?IR=T