Using the concept of “Grit” to drive goal achievement

Using the concept of “Grit” to drive goal achievement

Angela Duckworth was in her late twenties and working as a management consultant when she decided to leave her demanding job and teach maths at a New York public school. What she observed in the classroom led her to pursue a degree in psychology. She observed that some children worked much harder and longer than others. Duckworth wanted to know why. What she found after studying many different groups of people is that intellectual talent was not the defining factor between the best and worst performers, but rather, what emerged as a significant predictor of success was “grit”.

Grit in psychology is a trait based on an individual’s perseverance of effort combined with the passion for a particular long-term goal. It is the tendency to sustain interest in and effort toward very long-term goals – which Duckworth believes to be the hallmark of high achievers in every domain. Thus, grit is living life like a marathon rather than a sprint. Grit serves as the overriding factor that provides the endurance required to “push through” amid challenges and setbacks. Grit, unlike many traditional measures of performance, is not tied to intelligence. Duckworth suggested that this helps explain why some very intelligent individuals do not consistently perform well over long periods. You cannot have grit without a goal.

Duckworth provides an alternative framework to structuring long-term goals and their attainment. According to Duckworth, grit is about holding the same top-level goal for a very long time.

Visualise your goal setting as a hierarchy with multiple levels, be it work-related or personal.

The low-level goals are your day-to-day actions like writing emails, going to meetings, jogging for an hour, reading, etc. We do these goals as means to an end of a higher-level goal – such as executing a project. The higher the goal in this hierarchy the more abstract, general, and important it is. Waking up at 5am is a low-level goal as it only matters because of a mid-level goal, arriving at work on time.

The ultimate goal is what should drive every action at lower levels. If an activity does not fit strongly within your goal hierarchy, then it likely is not moving you closer to your goal and maybe you should stop. For example, you might find that spending an hour answering emails is not actually helping you make real progress on your project, which then is not driving you toward your goal.

Furthermore, the low-level goals are not to be held sacred. If you fail on a low-level goal, another can take its place. If you find a new low-level goal that is more effective and feasible, you can swap it out for another. 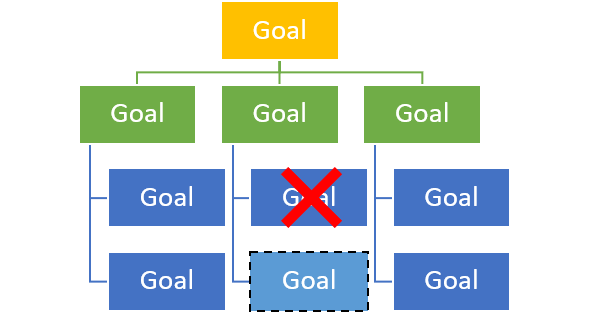 When well-constructed, a goal hierarchy promotes grit. If all your activities are in pursuit of your highest-level goal, then your everyday activities apply effort toward your goal.

A good way to start is to complete the Warren Buffett prioritisation exercise.

This exercise will allow for a more focused view of prioritised goals.

Duckworth, A. (2016). Grit: The Power of Passion and Perseverance. Penguin:

Scott, D. (2018). Warren Buffett’s 5-step process for prioritising true success (and why most people never do it). Retrieved from https://liveyourlegend.net/warren-buffetts-5-step-process-for-prioritizing-true-success-and-why-most-people-never-do-it/

Umoh, R. (2018). This simple mental diagram can help you discover your ultimate goal in life. Retrieved from https://www.cnbc.com/2018/03/08/use-this-mental-diagram-to-discover-your-ultimate-life-goal.html